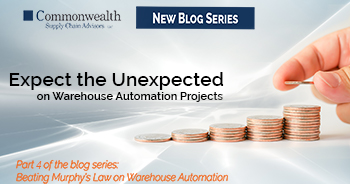 A key tactic to avoid disappointing project results is to explain the concept of  Murphy’s Curve to the executive team and financially account for the inevitable drop in productivity during implementation. Plan for Murphy’s Curve. Build it into the project ROI model through a solid risk mitigation plan.

Some key cost increases which often occur during the Murphy’s Curve period at project startup include:

In each of the above (true) examples, the problems which befell the project were difficult to anticipate but resulted in both time and cost overruns. Adding a certain percentage of contingency time and cost to the project budget is the only way to ensure that the budget can withstand some of these unexpected manifestations of Murphy’s Law.

The above costs should be estimated as accurately as possible and included as project costs in the accounting model. While doing so will almost certainly increase the payback period for the technology, failing to account for these factors will result in a return-on-investment projection that is incorrect. If the project will not meet the corporate ROI guidelines once the additional costs from Murphy’s Curve have been factored in, then perhaps the rationale for the doing the project in the first place should be reconsidered. Don’t fall prey to thinking that the current project will be the exception to the rule. Remember, the productivity drop from Murphy’s Curve occurs even if everything goes according to plan. There is an inevitable adjustment period as operators and managers get used to using new technology, which will result in loss of efficiency even in the best of deployments.