Warehouse Automation: Don’t Launch the Ship in a Hurricane! 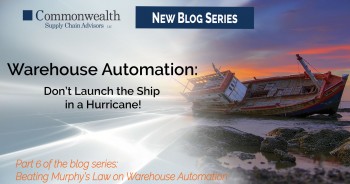 Many companies make the mistake of going live with a new project either during – or immediately before – a peak demand period. For companies in the retail or consumer goods sector, each year can bring greater seasonal surges as consumers increasingly align buying habits around “Black Friday” or “Cyber Monday” promotions during the year-end holidays. These events can mean demand surges of more than ten times normal volumes. While companies may view the new system as vital to helping the company survive the next busy season, deploying poorly tested technology at the height of the busy season is a recipe for a shipwreck.

To avoid this, companies should plan to deploy new warehouse automation as far in advance of the peak period as possible and have a contingency plan in place if the project is delayed (as noted previously). It may be possible to rent additional space where orders can be manually picked for a period of time during the busy season, using temporary workers. This option may not be inexpensive, but it is likely preferable to being forced to go-live with an unready system.

Ultimately, the company should make an honest “go/no go” decision well in advance of the busy season and have a “Plan B” to delay the go-live until after the busy season, if needed.